The past couple of weeks I have been trying to update my garden for the spring.  Being sick for a month in November has made it hard catching up on things that need to be done.  Chores have been laying mulch, trimming, pulling weeds and today I started changing up things a bit with my raised beds.

Last year was the first time I planted directly in to hay bales and was very pleased with the results. Who wouldn’t want 40lbs of tomatoes?  A few days ago I read an e-book from Amazon “Hay Bale Gardening” by Larry Zoro.  His take is to make raised beds using hay bales as the structure.  You make a  square or other shape with a hole in the middle, fill it with rotting wood, then layering with compost, cardboard, rotting hay, and soil.  This book is a great quick read for $1.59.

This year I have decided I will be planting directly into hay bales and trying this new method of using the hay bales as the outer form.  With this in mind I have had to stack some of my plastic raised beds to make room for the hay bales.  This will also make these raised beds higher so I am not bending over as much. Getting older ain’t so fun sometimes.

Today I stacked two sections and filled with last years hay, compost (I traded with Happy Hoves Farm) and soil.  Into the larger one I am planting successive plantings of beets and the smaller one has my celery (grown from the base of celery I purchased and used) and pieces of onion that have sprouted in my fridge. 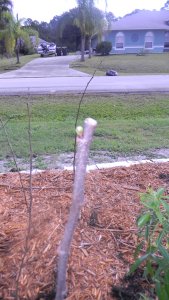 A few days ago while pulling up sweet potatoes that have grown everywhere (about 25 lbs) I noticed that some of the Mulberry I trimmed and left on the ground had sprouted.  I am still amazed at how God works.   I also noted that my Mulberry was sprouting berries!

If you are able to grow all year round how is your garden doing?