This past week I went to an office supply store (to remain un-named) and purchased a really nice chair to replace my husbands that was falling apart.  They would have charged $10 to assemble and since I can usually put things together (HEY, I put together my composter) I took it home in the box.

Everything was going well until the final screw.  It would NOT go in.  I tried moving the chair every way I could but with no success.  My husband even tried, no success.  So I threw the partly assembled chair back into the box, into my car, and returned to the store.

They asked why I was returning it and wanted to know if I wanted a replacement.  I told them sure if they would assemble it for free.  They did not even give me an answer and refunded my monies.  They could have at least said sorry no we can’t do that.  I returned home with no chair.  Most of the other chairs that I looked at all had arms and that was the part that was very hard.  The ones without arms were not half as nice as the one we have now, well when it was new.

This morning while on my way to run errands I was thinking about what to do.  Then I remembered I had seen someone on Pinterest recover a chair like ours and thought I can do that (I recovered my glider rocker).

Now what to cover it with……I wanted something that would not wear easily……Jeans!  And I had a couple of pairs that I was going to recycle into something.  I also decided I would purchase a memory foam pillow to put in there too (maybe a little too much but I never do anything small, haha).

It only took one pair of jeans.   I cut the legs off a size 8 cut the inside seam and sewed the 2 legs together.  Perfect! 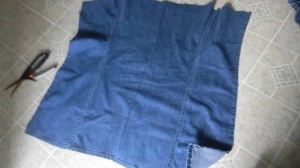 I then turned them over, placed the pillow down,then the chair on top (minus the back), and started stapling away.  I pulled the jeans tight and stapled the 4 corners first.  After everything was stapled I cut away the extra fabric. 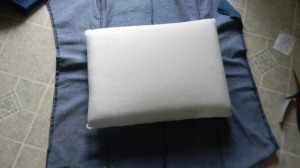 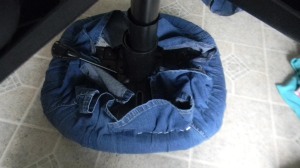 Boy was this easy!  And it took about 15 minutes.  Hope hubby likes it.  At least pieces of the chair are not falling all over the floor anymore.