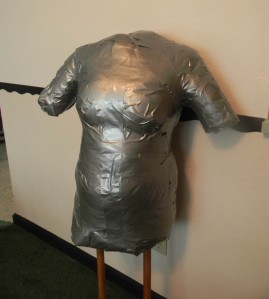 I have wanted to do this for about 15 years.  So why did it take so long for me to do it, I have no idea.  I am under 5′ tall and have a very short waist.  There is no dress form in world, that I could afford, that would match my body. I recently have been doing a lot more garment sewing and it is extremely hard to fit a pattern or a muslin on myself so it was time to give it a try.

NOTE: This is not a project you can do by yourself so I asked a friend for some help.

WARNING: Seriously, if you are claustrophobic don’t attempt this.

dress form.  I wanted it to come down over my hips so I purchased a mens medium.  It was way to big under the arms so I had to take it in.  If your husband has an old t-shirt that would be even better as there would be no cost involved.

Before we began we watched the following video to get an idea of how to apply the duct tape.  After that it was time to get started.  We used probably 3 layers of tape and maybe 4 in some areas.

After it was completed I got the black marker out and we marked the waist by bending right and then left at the waist and marking.

The next step is why you invite a very good friend to help you.  She cut up the back of the dress form cutting the shirt and being careful not to cut any under garments or skin along the way. 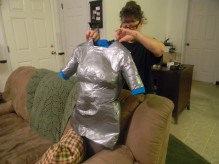 This is what it looks like after you take it off.  I then carefully taped together the cut in the back and firmly stuffed it with polyfill.  I used about 2 1/2 bags of polyfill. I then  taped the bottom, sleeves, and neck opening closed.   This project will take about 2 1/2 hours to complete.

I put my dress form on a quilt stand that I had.  One video I watched showed putting a hanger into the form and then stuffing, but then you will need somewhere to hang it.

This is a great inexpensive way to have a form of your body. If I lose or gain weight I can just do another one.